A new age in digital transformation is requiring manufacturers to rethink their existing business models and corresponding infrastructure. To remain relevant and competitive in the age of Industry 4.0, manufacturers need to do more than simply adopt digital technologies and deploy predefined processes in isolated islands of automation as they have done in the past. The future of industry rests on understanding what is driving this new wave of digitization, how our current model of industrial automation is changing, and embracing what the future holds.

A Vision for Smart Manufacturing: Service- and Demand-oriented

Manufacturing strategies are always evolving. With increasingly diversified customer demands, companies are constantly looking for ways to cater to customers’ needs while also increasing operational efficiency. In the past, companies would plan their production based on the sales forecast and get their product on the shelves as soon as possible. To keep up with an increasing production quantity, companies would duplicate the same production lines as a means to efficiently and quickly satisfy the rising demand. This method works well when mass producing a single, defined product. But what if customers want different variations of the same product? How can companies address these dynamic, fast-changing customer needs? These conditions call for rethinking existing manufacturing strategies. Companies increasingly aim to achieve higher productivity while fulfilling the various needs of their customers at the same time. In response, manufacturing methods are slowly evolving from mass producing a single product with set specifications to an on-demand manufacturing approach based on customer's requirements. 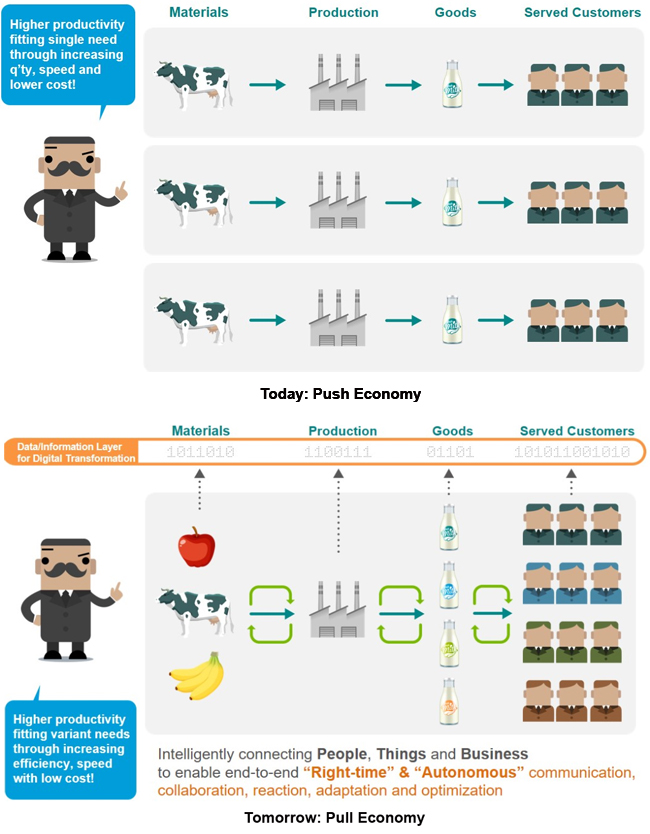 The vision of tomorrow’s smart manufacturing is one of intelligently connecting people, things, and businesses to enable time-sensitive and autonomous end-to-end communication, collaboration, reaction, adaptation, and optimization.

Envisioning the Future: The Purdue Model of Tomorrow

The traditional Purdue model, as represented by the “automation pyramid,” outlines different layers of network communication that remain fragmentary and are both costly and difficult to maintain throughout a system's entire life cycle.

Calls within the industry have been made to transform the current model into an “autonomous pyramid” that is capable of responding to market and business conditions in real time. In this newly envisioned architecture, isolated islands of automation and network data flows are able to communicate with each other through a common semantic and seamlessly connected infrastructure. 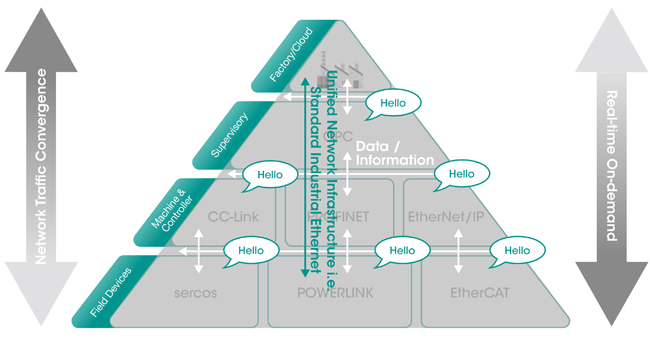 Autonomous Pyramid of Purdue Model for the future of smart manufacturing

By implementing the autonomous pyramid of the Purdue model, manufacturers can realize their vision of smart manufacturing through one unified network infrastructure. However, several fundamental challenges arise. For instance, in a unified network infrastructure where all data flows through a single channel, network administrators need to make sure that this increased transparency does not impact deterministic data processing. Additionally, how can administrators guarantee the correct flow of information so that the right decisions and actions can be taken in time?

This is where Time-sensitive Networking (TSN) comes in.

To realize truly converged and interoperable networks that can simultaneously process critical and noncritical application data in a single industrial environment, the Time-sensitive Networking (TSN) Task Group of the IEEE 802.1 Working Group is defining a set of standards for enabling the deterministic transmission of data over standard Ethernet networks. This added layer of functionality future-proofs longstanding Ethernet technology and extends its use in a vast array of new applications.

As a collection of standards, the concept of Time-sensitive Networking is more like a tool box than an all-in-one solution; you need to understand what “tools” are available and how each tool works in order to determine which tools are appropriate for your application.

Depending on the application requirements, various combinations of these tools can be put together to build infrastructure for specific needs or purposes. For example, one TSN profile being defined by the IEC/IEEE 60802 Joint Project aims to provide a guideline on what standards to choose from the toolbox and how they can be used in industrial automation applications. The TSN toolbox contains a set of functional and configuration standards that be combined into application profiles.

From an overarching perspective, all standards in the toolbox can be categorized into one of the following aspects of TSN:

As the name suggests, “Time-sensitive Networking” focuses on establishing a common time reference between all devices within a unified and interoperable infrastructure, which forms the foundation of its entire operations.

By adopting the concept of non-negotiable time period allocation for end-to-end transmissions, these components ensure deterministic data transmission over the network.

To implement and maintain all aspects of a deterministic networking environment, a set of components has been defined to ensure optimal reliability and security.

When the network and applications become more converged and larger in scale, additional tools are required for provide better manageability and visibility.

Besides providing the standard Ethernet hardware for creating unified infrastructure that conforms to TSN standards, Moxa has been actively participating in cross-vendor TSN plugtests and testbeds around the world, such as the ones hosted by the Edge Computing Consortium (ECC), Labs Network Industrie 4.0, the Industrial Internet Consortium (IIC), and the Alliance of Industrial Internet (AII). Moxa is also one of the initial supporters of the OPC Foundation Field Level Communications (FLC) initiative to promote the development of TSN technology. TSN is bringing together many different industry organizations and market leaders under a common goal to realize the full potential of Industry 4.0 and the promise of digitization.

For more information about TSN and its applications, download our white paper.